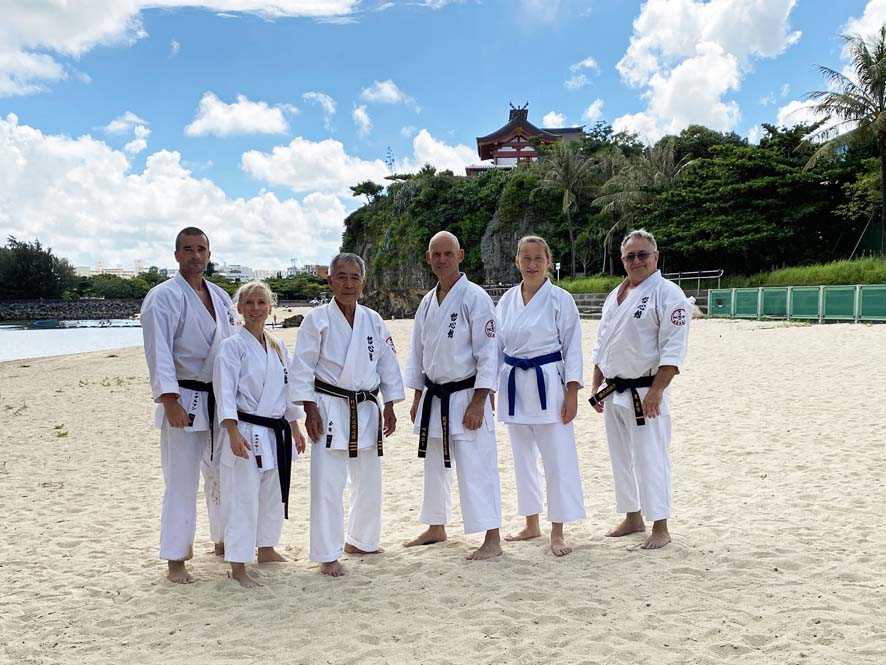 First of all, this Okinawa trip has eclipsed everything that has been done so far in the last 20 years in terms of organizational effort.

The travel preparations began in the long term at the end of October 2021, shortly before the second corona lockdown. The official website of the tournament was used to register the starters and coaches.

Despite the uncertainty due to the corona situation, our group consisted of ten travelers from all over Germany who wanted to represent the “Ryûkyû Kobudô Tesshinkan – Europa” (www.kobudo-tesshinkan.eu) at this World Cup as a starter in Kobudô.

At the beginning of November, the flights to Japan and the hotel in Naha / Okinawa were booked. So far, everything worked as usual.

The biggest challenge was to obtain the visas to enter Japan. Due to Corona, Japan has lifted the visa-free regime for Germans. For a short time, there was even a general entry ban. With the help of the Organizing Committee of the World Tournament on Okinawa, the participants could be registered via the electronic ERFS system of the Japanese Ministry of Health. This registration, in turn, was required to apply for the visas. After all, each participant had to go to the Japanese embassy in person and have their visa stamped into their passport. But even this was finally done and at the beginning of July 2022 all participants had their visa.

Now, the next stumbling block. The failed personnel policy of the airlines in Corona times took revenge and led to overloads. The flights of some participants were cancelled on short notice, two weeks before the start of the trip. This caused extreme stress and meant that some participants could not travel.

Other participants cancelled their participation due to corona, health problems or simply lost the desire due to the problematic conditions.

In the end, only four travelers met at Frankfurt Airport: Frank Pelny and Heike Prophet (GER / Nordhausen), Sebastian Edelmann (GER / Leipzig) and Stefanie Dahlke (GER / Erfurt). This is where the chaos continued: strike of ground staff, postponement of flight times, incorrect bookings by airlines and change of flight route due to the current political madness in the world. Thus, the flight time to Japan was extended from 11 to 14 hours due to detours around Ukraine, Russia and North Korea. And, of course, appropriate corona requirements had to be met, from PCR testing for entry into Japan to wearing a mask on the entire flight. But once you are out of Germany, traveling becomes much more relaxed and, above all, usually on time.

The four brave ones who eventually overcame all these problems could hardly believe it when they actually landed on Okinawa. What a trip!

Said goodbye to family and friends at home with the best wishes for a great holiday and relaxation, the reality was significantly different. On the day of arrival, our Master, Tamayose Hidemi (10th Dan, President of Ryûkyû Kobudô Tesshinkan Kyôkai and Vice President of Okinawa Ken Kobudô Renmei) asked for a first conversation, which then required more than two hours.

On the morning of the second day, the first training started at 7:30 a.m. on the beach. And since sleeping in on holiday and jet lag are supposed to be legends 😉 Tamayose Kaichô also carried out the graduation exams at the end of the training so that we had our heads free for the World Tournament. Since the test also took place at a humid 32 degrees in the sand on the beach, instead of on a smooth sports hall floor, this task was not easy to solve. Finally, Frank Pelny and Sebastian Edelmann (both from Karate-Do-Kwai Nordhausen e.V. / www.karate-nordhausen.de) were exhausted but happy to pass the 6th Dan in the Ryûkyû Kobudô and were each awarded the title Renshi. This was the first time in the Tesshinkan Association that such high Dan grades were awarded to foreigners. A good start and an extraordinary honour!

After two more days of morning beach training, the World Tournament began for us on Thursday (4 August) with the preliminary round eliminations. A total of 1,700 participants from 24 nations took part in this World Tournament. Including our three starters, there were only four in total who had made it from Germany to this point.

On the weekend (6-7 August) the qualifications of the best 16 and 8 took place. Finally, the semifinals and finals.

In addition to the qualifiers from abroad and the Japanese main islands from the preliminary rounds on Thursday and Friday, there were now the four starters from Okinawa, who had already completed their preliminary rounds in May and were now seeded for the semifinals. For us, this meant that most of our opponents were Japanese and Okinawans. For example, the later world champion in the category Bô senior was Ishiki Hidetada, an 8th Dan from Okinawa.

At the award ceremony on Sunday evening, the only three starters of the Tesshinkan were able to receive three of the special medals made of Okinawa glass:

On Monday (August 8), there was the opportunity to participate in various seminars with Okinawa masters. Of course, we did not miss this extraordinary opportunity to learn directly at the source and were rewarded with interesting insights. The seminars were attended by 450 participants.

This World Tournament took place on the occasion of the 50th anniversary of the return of Okinawa by the USA to Japan (1972). As usual, everything was perfectly organized. The event was organized by Okinawa Prefecture. Despite the extreme corona numbers on Okinawa (incidence 6,000), a great event was held.

Daily temperature measurements and corona tests of the participants, access controls, mask requirements and much more ensured a high level of security for all those involved.

Before we started our journey home on Wednesday, Tuesday morning was of course another beach training. The weather on Okinawa was exceptionally rainy this year, so that a rain shower surprised us more often during training and we therefore continued to train under the car bridge. The masters on Okinawa say: “A karateka may call himself who trains karate every day.”. I think we have fulfilled that.

In addition to all these activities, there was still some time for sightseeing and shopping. It remains to be noted that there are currently very few tourists on Okinawa. No comparison at all to previous years. In particular, the absence of Chinese tourists was noticeable. During our visit to the Royal Castle Shuri-Jo, we were able to observe the progress of the construction work of the main hall, which burned down in October 2019, and the other eight buildings.

As unfortunately usual in our art / sport, it remains to be noted that all activities were again completely privately financed, as our sport is not of interest for sponsors.