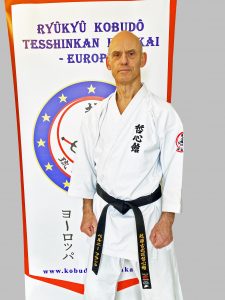 FRANK PELNY was born on September 14, 1960 in Nordhausen / Germany. Nordhausen is a town at the southern edge of the Harz mountains and is located in the state of Thuringia. Before 1989 this area belonged to the GDR (German Democratic Republic).

At the age of 14 he started with Judô and in 1981, as part of his military training, with Shôtôkan Karate and close combat. In total, he served 10 years as an officer in various military special units of the NVA (National People’s Army) of the GDR.

From 2004 he took over the role of technical director in the Ryûkyû Kobudô Tesshinkan – Europe and since then he has been in charge of the Tesshinkan-Dôjô in Europe, parts of Asia and Latin America.

The first seminars abroad followed in 2007, where he taught Tesshinkan in the Russian Federation, later also in Canada, Belarus, Sri Lanka and Brazil.

Pelny Sensei has been to Okinawa for training more than ten times in recent years and has also competed in five world tournaments. He achieved his best placing in 2015 with the vice champion title at the “2015 Okinawa Traditional Kobudô World Tournament” in the Bô senior category.

In particular, his textbook publications and the YouTube channel on Ryûkyû Kobudô Tesshinkan brought him worldwide recognition. It is currently the most comprehensive documentation of a Ryûkyû Kobudô system.

In 2018, Tamayose Kaichô recognized Frank Pelny’s commitment by awarding him the Shihan-Menkyo (teacher diploma) and officially authorized him as Shibu-Chô (branch manager) for the dôjô in Europe.