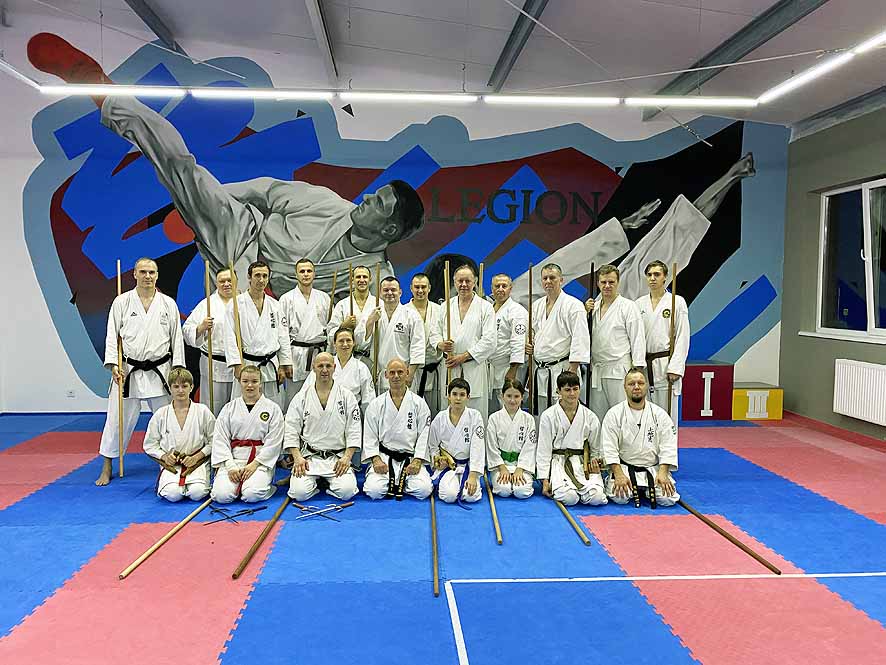 Despite Corona, the Ukraine war and various sanctions, Frank Pelny finally managed to travel to Russia again this year and to give Russian Tesshinkan practitioners the latest updates and to conduct exams.

The organizer of the seminar was Pavel Dolgachev, a student of Frank Pelny and with the 4th Dan the highest graduate Tesshinkan in the Russian Federation.

Dolgachev Sensei had rented a 3-store house in which all those who came from outside to Kaliningrad for the seminar lived. Pelny Shihan also lived there, so there was plenty of time and opportunity to communicate with each other after the training sessions.

The participants came from Moscow, Voronezh, Kemerovo (Siberia), Sevastopol (Crimea), Nordhausen (GER) and of course Kaliningrad. A total of about 25 athletes took part in the seminar.

Shortly after Pelny Shihan’s arrival, a first training session spontaneously took place on Thursday afternoon at the request of Dolgachev Sensei. The topic was the Bô-tai-Sai for the exam preparation of the candidates for the 2nd Dan.

The four-hour training sessions on Friday and Saturday took place in a sport center in Chkalovsk. This dôjô owns Alexander Gendrickson Sensei, a karate legend in Kaliningrad. The focus of the training was the new variant of Shômen-Uchi with Bô, shifting of the body’s center of gravity in the various techniques with Bô and Sai, Bô-no-Kihon combinations 9 and 10 with Bunkai and Sai-no-Kihon. As known from Pelny Shihan, the intensive and informative training was methodically well structured and he meticulously explained the important details. In some cases, the seminar was divided into groups, where also Dolgachev Sensei took over a group.

In addition, the dining room in the house was converted into a dôjô in the morning and Pelny Shihan taught two more hours of Shôtôkan karate. The few participants and many spectators exchanged many interesting ideas.

On sunday morning, a small Kobudô competition took place. The participants showed a lot of commitment and good techniques in Kata and Yakusoku-kumite.

After this, the exams for Kyû and Dan grades took place. In total, 1x 3rd Dan, 2x 2nd Dan, 2x 1st Dan and some Kyû grades could be passed.

In the evening, everyone gathered and chatted with Frank Shihan and his wife.

The seminar and the free time were perfectly organized. Many thanks to Pavel Dolgachev, Dmitriev, Alexey and Rustam for the time and efforts.