In 2020, the German Tesshinkan community was able to meet in person for the last time in the summer under hygiene measures. Other planned training courses unfortunately had to be cancelled due to the increasing incidence later during that year. Club trainings were also gradually switched completely to online delivery.

In the second year of the Corona pandemic, courses with personal attendance still cannot be planned, which is why, on the initiative of the Shotokan Dojo Leipzig e.V., a first Tesshinkan online seminar was organized for 11.04.2021.

Trainers from all over Germany could be won for the course, for example from clubs in Thuringia, Saxony, North Rhine-Westphalia and Bavaria.

In spite of the short-term organization of the course, about 25 interested people did attend. The training program contained 9 units of 30 minutes each in two parallel meeting rooms. In addition to Shorin-Ryu Karate, units with the Bo, Sai, and other weapons were taught and there was something for everyone, from beginners to Dan holders. Black belt holders from 1st to 4th Dan were available as trainers, who were able to present their different training methodologies and also offered “old hands” new perspectives on the techniques.

In addition to the physical training, the online course was also used for theoretical training. Dr. Hagen Walter from Seishinkai Jena e.V. used his experience as a PhD of physics and experienced martial artist and gave a lecture on biomechanical aspects in Tesshinkan.

Despite the shortcomings and some teething problems, the organizers are satisfied with the execution. The participants of the event have already expressed themselves during the course for a repetition soon and would look forward to a deepening of the inter-club training also after Corona times. 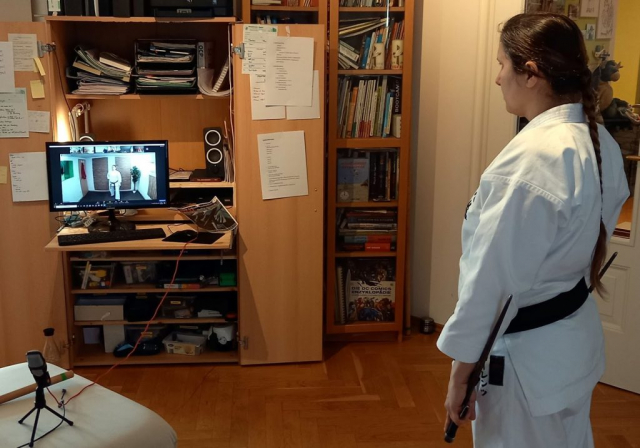