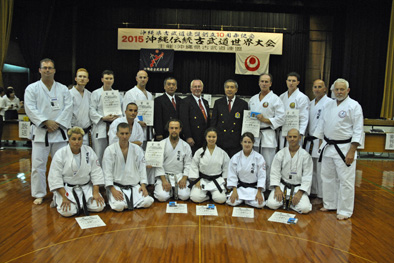 The group consisted of members of several Dôjô: From Nordhausen, the head of the Dôjô Frank Pelny and his wife Doris as well as Petra Hauschild. From Jena, the head of the Kobudô section of the Seishinkai Jena, Hagen Walter, and Gesine Hauschild (both formerly from Nordhausen) and David Hornig. To make the Thuringian group complete, Ramona Risch, head of the Kobudô in Ilmenau, and Martin Mähler of now Cologne and Ennepetal joined us. But furthermore, members from the neighbouring Saxe-Anhalt and Saxony joined us too: Sebastian Edelmann (Leipzig) and Tony Kräker and Hjördis Jüttner (Halle).

For some of us, such as Ramona, Petra, Gesine, Hjördis, Martin and David, this was the very first trip to Okinawa. For others like Frank and Sebastian, it was already the tenth trip. Be it your first or fifth trip to Okinawa, Okinawa always has something in store for you – although your perspective will change over time and your attention will be caught by different thing that you come to value highly. A very special trait of the island’s inhabitants is, for example, their friendliness and seemingly endless readiness to help others that we could witness on several occasions.

The group arrived in two waves in Naha, Okinawa’s capital. The Saxonians and Saxe-Anhaltians had already arrived on April 9. The Thuringian group started their journey on April 10 and arrived on April 11 at the Naha Airport where they were welcomed by Tamayose Hidemi Sensei and his son Tetsushi who brought them straight to the hotel. The hotel was located in Azato in proximity to the well-known shopping mile Kokusai-Dori

The remainder of the day was left at our disposal. Some relaxed and carefully approached the local cuisine. A very special delicacy of this island is Goya, a bitter melon. This vegetable is omni-present in Okinawa’s pop culture and serves to some extent as symbol of identification with the island – along the Shisa (a mythical lion-dog) and Karate. Goya is believed to cause longevity – be that as it may, but it definitely leaves you with a strikingly bitter flavour in your mouth for quite a while. Aside from Goya, the local cuisine offers some kind of doughnut-like pastry, fish dishes like Sushi, Sashimi and Okinawa Soba. Okinawa Soba is a nourishing noodle soup made with three-layered pork and fish cake – simply the best after a long and exhausting day of training.

The younger members of our group immediately began to explore the island. During theri journeys, the quickly found the pub district, where one could sit underneath lanterns and lampions and enjoy such local delicacies such as jasmin tea and Awamori. This small complex of pubs located in a back road of the Kokusai Dori, readily offered many chances to test one’s Japanese skills. Another and internationally well-known pub is the Dôjô Bar which is martial arts-themed, run by a martial artist and serves as a meeting place for martial artists from all over the world.

The next day, Tamayose Sensei and his son Tetsushi took the first-timers to a tour around Okinawa. Amongst the sights visited, were the Churaumi aquarium and the Manzamo cliff.
Frank, Sebastian and Hagen on the other hand went on a first shopping spree to among other Shureido and a seal manufacturer.

The next day, the first of many trainings took place. Tamayose Sensei invited us to go train in the just recently-opened Karate KaiKan, a centre for traditional Karate. There were met our Canadian friend Dan Antonsen. As it was to be expected, the first training focussed mostly on Kihon – the foundation.
After more than four hours of training and four liters of water per person, we were done. The Karate KaiKan also hosts a Karate museum. Similarly to the ones of Nakamoto Masahiro and Hokama Tetsuhiro, plenty of old weapons, photographies and Gi were displayed. To our great amusement, the museum had a try-it-yourself section allowing us to practice with training tools such as iron shoes (Tetsu-Geta) and heavy vases (Nigiri Game).
During the training at the Karate KaiKan, we also met with the Danish Karate and Kobudô teacher Lars Anderson (Jôshinkan Isshin Ryû and Tokushin Ryû Kobudô) who had already been in contact with Hagen for a while.
Our last common activity that day was a visit to the Fukushu En, a splendour garden designed in accordance with Chinese aesthetics. Even though some of us have been there for the fifth or fourth time, it still is amazing to look at and walk through.

The next day we were met by a very good-humoured Sensei: training at the beach – Sensei’s favourite. After the Kihon practice, things got a little more relaxed: Sensei taught Êku and had us practice its signature technique – throwing sand against a target. Masako-san, Sensei’s lovely wife, provided us with home-made sandwiches and Onigiri (filled rice-balls) and plenty of water. Visibly exhausted and reddened, we ceased practice after four hours. Sensei took us then on another trip to see Seifa Utaki, a sacred forrest, which used to play a great, ceremonial role in Okinawa’s past. We then went on to go to the Ryûkyû Village, some kind of expo park, which had been built upon the site of a huge and other-wordly limestone cave. It is impossible to describe the beauty of this cave with its bassins filled with clear water, and no word would do it justice. On the area of the park we could enjoy an Eisa demonstration, a traditional dance involving a complex choreography and drums.

For the next three days, the training took place at the Budôkan. After each practice, Frank rewarded us with a sightseeing tour: the castle of Shuri, the Tama-U-Dun mausoleum, the bunker of Kaigungo and the Shikina En, a magnificient garden around the former royal summer residency.

On monday, the third day at the Budôkan, two examinations took place. Martin Mähler applied for Shodan and Hagen Walter for the Yondan. Both examinees tried to impress the international judging board consisting of 5 people, with Bô, Sai, Tinbê and Nunchaku. And they succeeded. Frank Pelny had the honour to be named as head of the examination committee by Tamayose Kaichô.

The last training at the Budôkan however, was not the last one – the next Tuesday we returned to the Karate KaiKan for our last official training. There, we met a group of German Matayoshi-Kobudô practitioners headed by Jhonny Bernaschewice. Tamayose Sensei had a great surprise in store for us that day! Together with his son, he drove us to the islands of Ikei and Hamahiga, whose former lord’s name is borne by some Kata. Although the weather was rainy, the islands were amazing nonetheless with their clear water and richly green forrests. The last station on our tour were the ruins of the castle of Katsuren.

Wednesday meant free time: relaxing, shopping or training. The guys from Jena visited Tamayose Sensei once more for a Karate session. More than 500 punches and far more than 200 kicks – that was the warming up. Sensei did these techniques along with us, whithout even breaking a sweat. After a brief, but necessary break, Sensei began the Kata practice. The Kata practice was interrupted by some Bunkai. Sensei showed and explained us among other topics how every block needs to be able to be turned into an armbar or lock immediately.

That evening, Sensei invited everyone for the Sayonara party to the roof top of his house. Sensei asked those who were here for the first time, what they liked the most about Okinawa. Aside from the cuisine, the answers were the people’s readiness to help and friendliness as well as their relaxed attitude. Sensei Tamayose and his family did their fair share to leave us with that impression. Thus, we want to express our deepest gratitude towards Tamayose Sensei, his son Tetsushi and his lovely wife Masako for their hospitality, training and friendship. Tesshinkan is one big family, as Sensei puts it. We could feel that. Thank you very much.

Last, but not least, we would like to thank Frank Pelny, who took the burden of organising the trip and took care of every one of us. 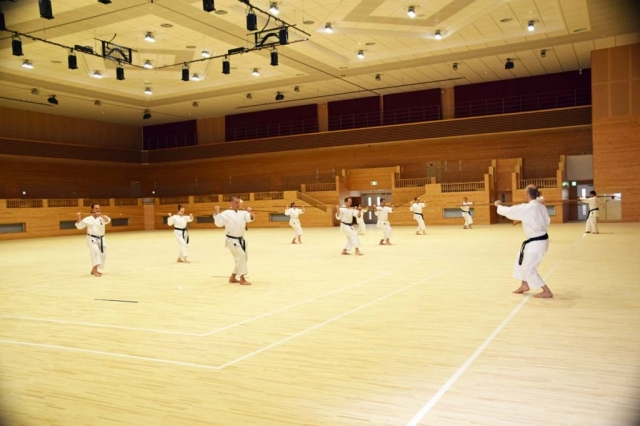 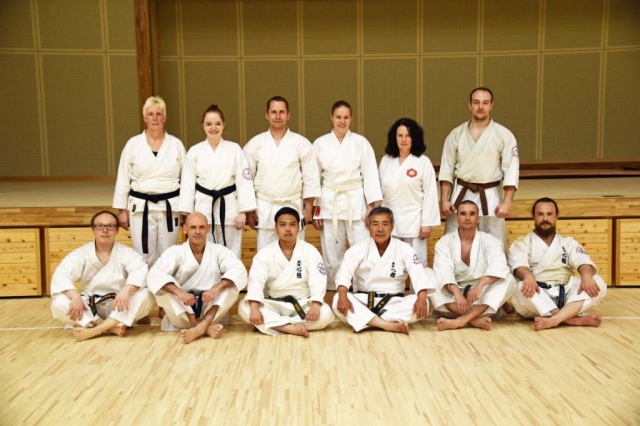 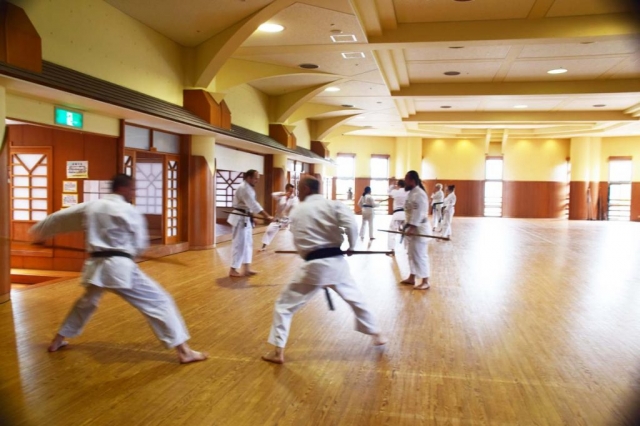 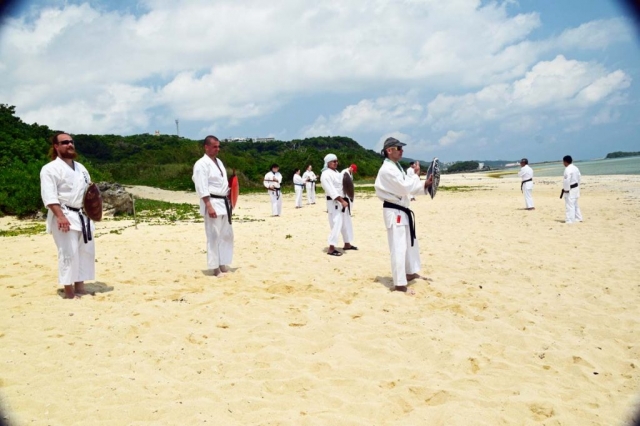 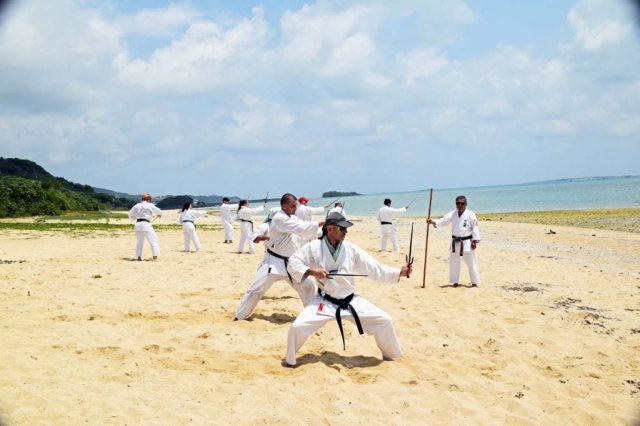 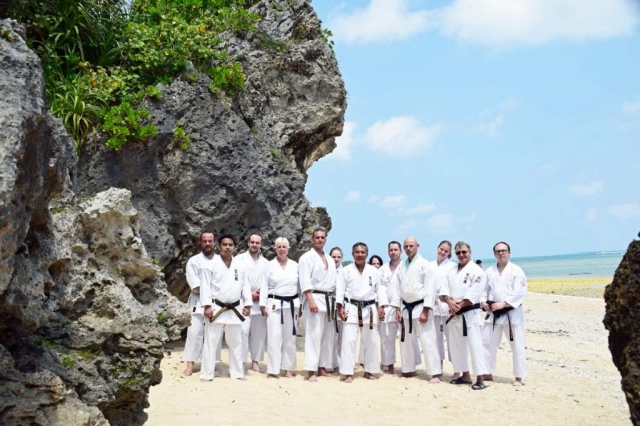 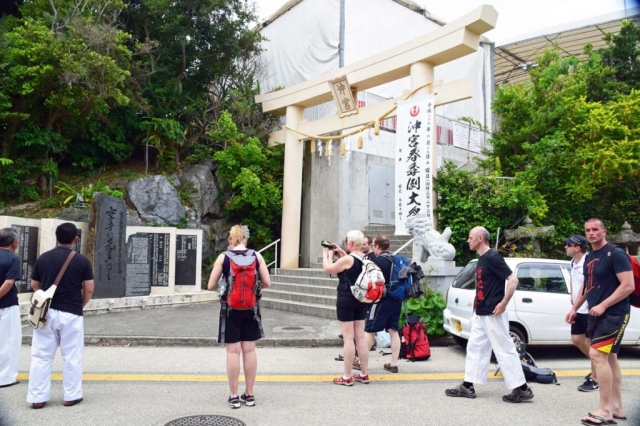 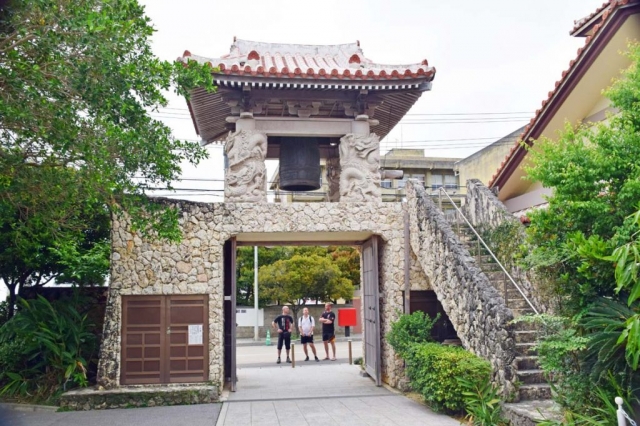 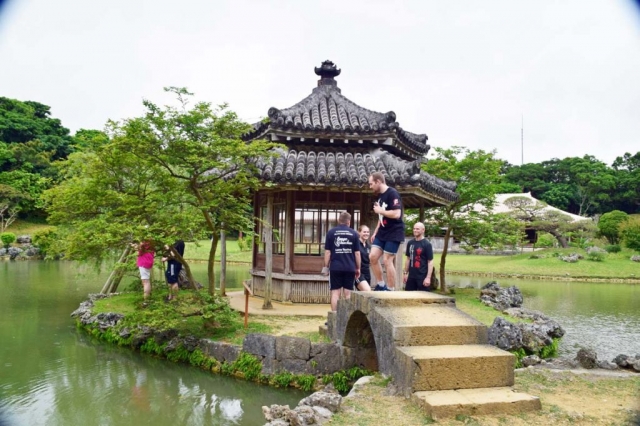 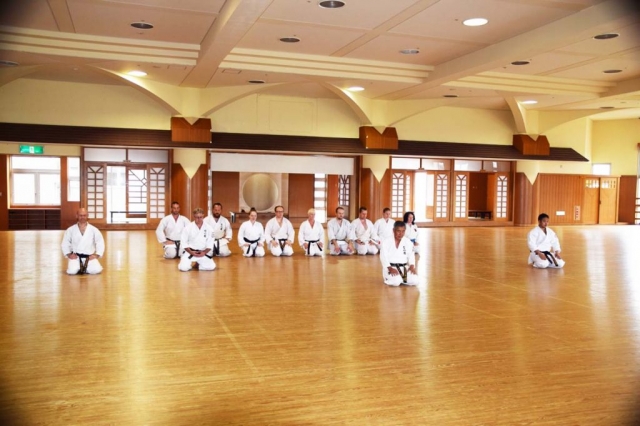 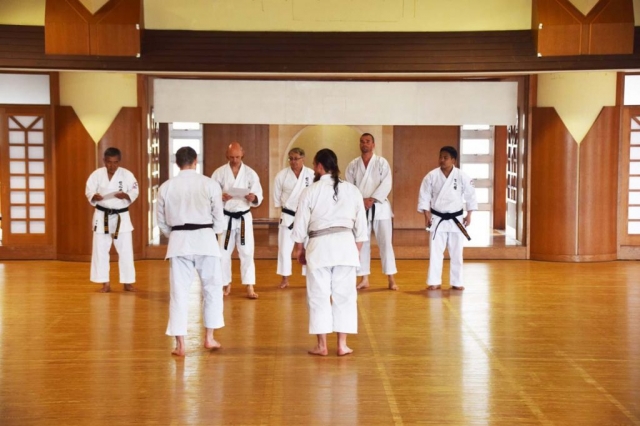 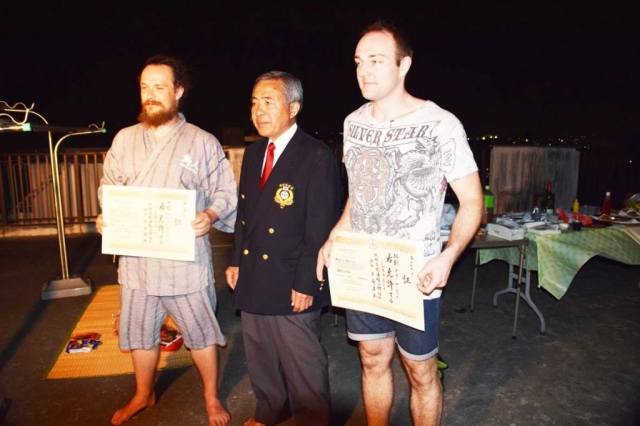 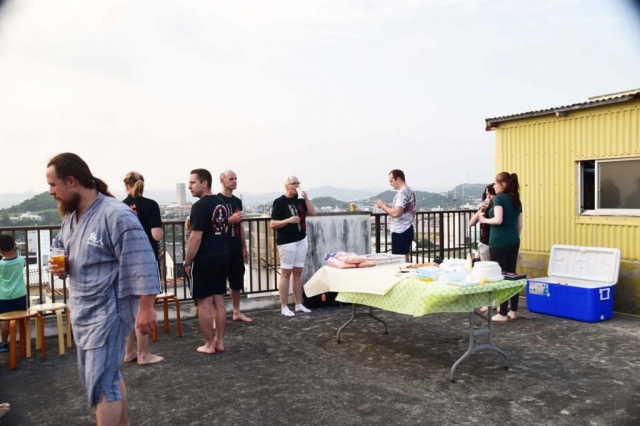 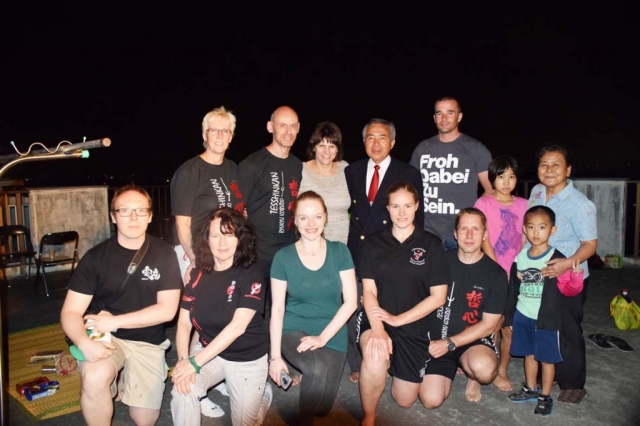 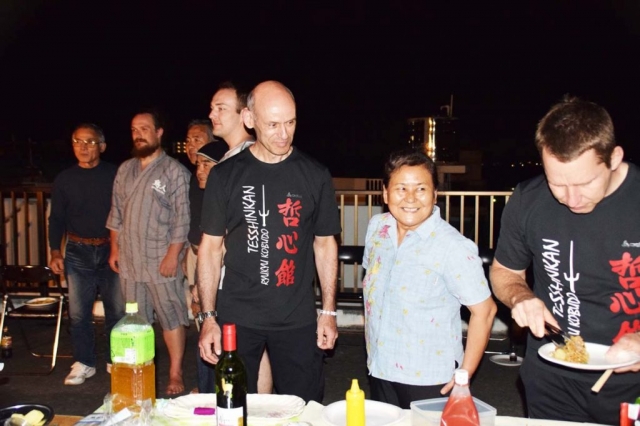