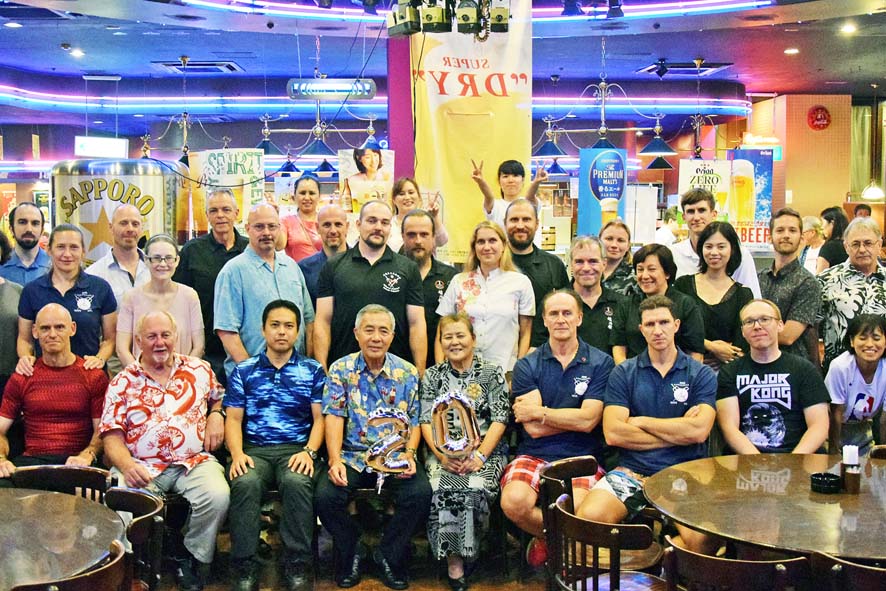 The German group meets at the Frankfurt Airport, ready for their flight to Okinawa. There, a abusy schedule awaits them: the 20th anniversary of the Ryûkyû Kobudô Tesshinkan Kyo Kai, the 70th birthday of the founder and headmaster of the Tesshinkan, Tamayose Sensei, and the 2019 Okinawa Traditional Kobudô World Tournament.

The group consists of:

The group have begun their journey to the other side of the world.

Okinawa is in plaine sight. Actually, Okinawa has been in plaine sight for more than an hour already – but the plane keeps hovering over southern Okinawa. Our mood starts to sour slightly.

Due to bad weather, the plane could not land and returned to Shanghai. The next steps for the stranded passangers were uncertain.

For quite some time, our group could observe the airport’s ground personell being yelled at by some rather irate ex-passengers. What would happen next and when anything would happen, remains obscure.

We are transferred to a hotel in Shanghai. Checking the weather app, we learn that the weather on Okinawa might not necessarily improve. The spirit is somewhat down. But, whatever. There’s nothing to be done, but to wait.

The plane is not launched due to a technical defect.

The plane takes off.

Arrival on Okinawa. Our hotel is in the Matsuyama district.

The area around the hotel is crowded with people dressed in suits and ties. As we later learn, it’s the nightclub district where we stay. However, knowing that Itosu and Motobu spent a great deal of their time in amusement centres to hone their skills, we are fine with it.

We began our day invading Shureido, one of the leading producers of Karate gear and attire. Having placed our orders, we used the remainder of the morning to settle in Okinawa again. A nutritious bowl of Soba close to the Makishi station, strolling through the crowded Heiwa-Dori, dandering along the Kokusai-Dori and its countless tourist traps. We finally met our friends Pavel Dolgachev from Russia and Sergey and Igor Miroutenko from Belorus again.

We spent the afternoon at the Budôkan, a multi-storey building dedicated to the martial arts located in the Onoyama park. There, we met our friends from Canada and the USA, and of course Tamayose Sensei and his Okinawan students.

It is always amazing to finally meet people in person after years of being social media acquaintances. Breaking the ice was easy, in fact, it molt away rapidly.

Under Sensei’s watchful supervision we went through the demonstration programme for the next day. The German group had quite a number of appearances as a group as well as single performances – a certain sign that Tamayose Sensei puts trust into us.

Today, the demonstrations for Tamayose Sensei’s 70th birthday and the 20th anniversary of the Tesshinkan will take place. Sensei even chartered an up-scale hotel in Furujima.

and many more. Summed up, the first row held a rank higher than the 200th Dan.

The demonstrations went smoothly. The highlight itself was the final performance: Tamayose Sensei performing Kugusuku-no-Sai. Sensei’s demonstration was proof that Kobudô and Karate can be your life-long companions. Sensei slided smoothly into the stances and swung the Sai effortlessly. Inbetween crisp thrusts. Finally, he would throw the Sai into a wooden block.

Changing back into his suit and tie, Sensei gave a speech. He was glad to age with Karate and Kobudô, he was glad to have made friends all over the world. His eyes became wet. To see a usually shy and restrained Japanese gentleman close to crying with emotions was a sign of trust towards us being part of his family. That trust is mutual.

We spent the next days with training. After the joint Kihon, everyone prepared for either the tournament or their up-coming examinations. Tamayose Sensei, supported by his son Tamayose Tetsushi Sensei, inspected everyone individually.

Meanwhile, we had one day off: sandy beaches, shopping, sight-seeing.

Together with the Canadian-Okinawan Karate masters Donald Shapland and Dan Antonsen, Martin, David and I drove to the middle of the island visiting the castle ruins of Nakijin. Twenty years ago, I would have never dreamt of sitting in a car with demi-gods (that’s what we called people with a 7th and 8th Dan back then), having a casual chat and cracking jokes. We have learnt a lot about the history of Karate in Canada and Okinawa from the 70s to the present. It was interesting from start to finish.

Having visited the ruins, Dan Antonsen Sensei invited us a lovely, but hidden place: Kishimoto’s restaurant. Apparently, this restaurant has been in existence for about 120 years. They most certainly serve the best Soba on the entire island.

On Thursday, right after the training, the examinations took place. David and Martin applied for the 3rd Dan in Kobudô and Shorin-Ryû and 2nd Dan in Kobudô respectively. Unfortunately, not all examinees could reach their goal. Martin and David, however, could. Furthermore, we would like to congratulate Mark Roznowski and Sara Hardjowasito from Canada for Nidan as well as Mac Newton for Godan. Congrats!

Yataimura, that’s the name of a small village-like streets made up of pub-like booths. It runs parallel to the Kokusai-Dori, but is still somewhat hidden. Along about a hundred meters, beneath the light of paper lanters, one can get to know the local beers, teas and Habu Sake (snake liquor). A brief visit there was, I think, due to the examinations passed, justified.

The friday was more relaxed than the previous days. During the morning, Sensei gathered us at the city hall of Nanjo introducing us to its mayor. The mayor spoke English excellently and conversed with us enthusiastically. He was really proud of and delighted by the role Tamayose Sensei plays internationally.

Thereupon, we headed back to the Karate Kaikan to register for the tournament.

The first day of the tournament: The weapons were measured and the lists checked. Among the judges were no one less than Nakamoto Masahiro (multiple world champion with Sai) and Iha Mitsutada.

The tournament started with all participants marching and lining up. After some speaches by the officials and representative of the prefectural government, the pledge was to be done. This is done by having one athlete march up and take an oath. The chosen athlete was – Hagen Walter from Jena.

Thereafter, the competitions started. Firstly, Bô. Frank Pelny, who was the oldest member of his group and category, managed to be placed second in his pool. Unfortunately, that was not enough, as the first-placed only, was allowed to proceed towards the next round. In the senior category, Sergei Miroutenko from Belorus prevailed over all the other participants – and wins again – as in 2015. Last, but not least, Lisa Ash from the USA secured bronze.

Regarding Sai, the fate was our side. Michaela Frost missed the podium only by small margin, coming in as fourth. Compared to 2018, Martin Mähler could improve by one place and was ranked fourth, too. Our Canadian friend Sara even managed to capture bronze in the female adult I category. Speaking a bout Canadians: Dan Antonsen, not quite senior, but elder gentleman, prevailed over the Japanese competition and a conquered silver! Silver, too, went to Igor Mirutenko from Minsk in Sai adult I. By the way, the first place in that category went to Hagen Walter from Jena – again – for the third time. (Yep, a dream did come true.)

In retrospective, the Tesshinkan group did quite well if one keeps in mind that Tesshinkan Kobudô both metaphorically as well as literally a rather grounded school: no flashy magic, no nonsense, no show – only the most necessary is done, but that is done properly.

Day two of the tournament: Bô-Shiai: Free sparring with staffs and armour. The only Tesshinkan-member to participate was Igor Mirutenko – who unfortunately was eliminated in the first round.

One of the major obstacles is the helmet imparing depths perception and cropping the field of view.

Later that day, the tournament’s farewell-party was scheduled and took place at the same hotel we were at a week ago. The judges and organizers appeared really relaxed and less strict than merely hours before. Tamayose Sensei being one of the main organizers, was a lot more relaxed, too. All in all, the evening was a fun one.

Actually, we could have slept late. But we had the opportunity to join one last training before leaving. Of course, early in the morning we headed to Ozato to Tamayose Sensei’s Honbu-Dôjô where we would spend the next ours training Shorin-Ryû-Karate. At this point we would like to express our gratitude to Tamayose Tetsushi Sensei for teaching us and Donald Shapland for interpreting. After having been invited for lunch by the Tamayose family, we paid a visit to the beach (finally!) and returned to the hotel.

The farewell-party was a highlight in its own rights. We spoke English with each other and Japanese – well, at least we tried – and shared anecdotes and stories. It felt like speaking to close friends or even family. Tamayose Sensei himself was deeply relaxed and happy – so were we.

Before heading back, we went on a last shopping spree. I was even lucky enough to encounter a cab driver who also practiced Karate and Kobudô. These were 20 delightful minutes. Surprisingly enough, we shared a favourite Kata: Hamahiga-no Sai.

Eventually, the clock struck three and Tamayose Sensei brought us to the airport. We said our farewells and then that was it – two weeks are over. Too fast, too soon.

We would like to thank the Tamayose family for the training and hospitality. Furthermore, thanks to Frank Pelny for organizing this trip.

By the way, the flight back went smoothly. 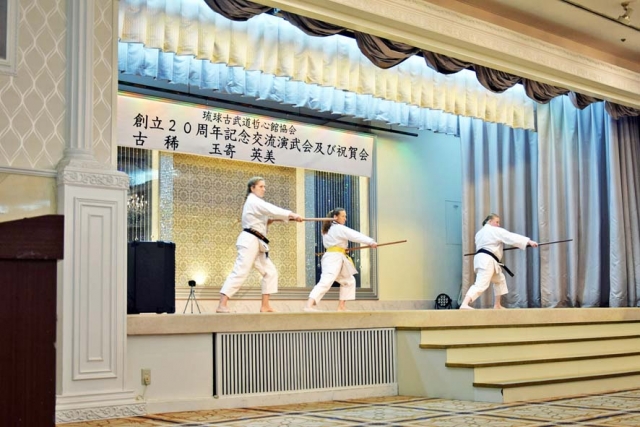 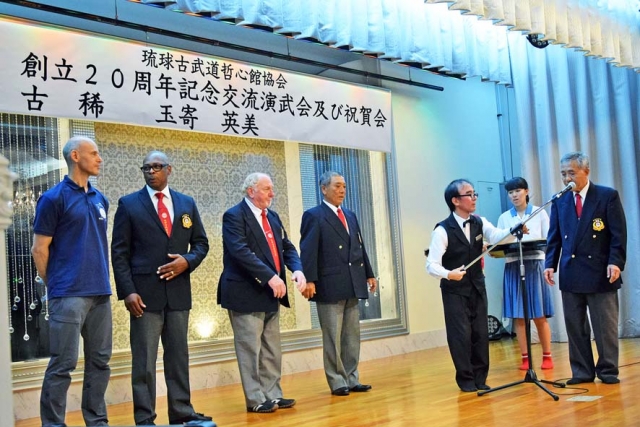 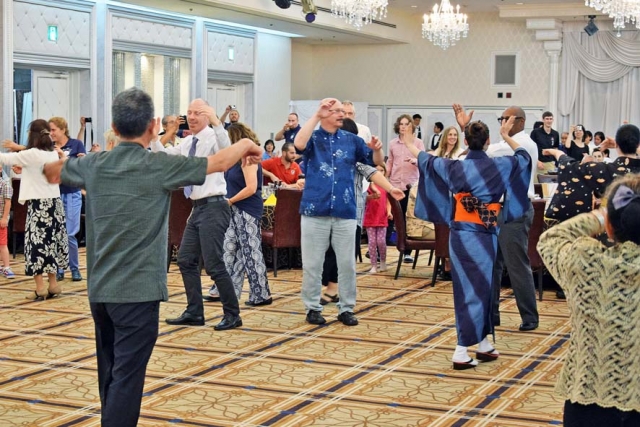 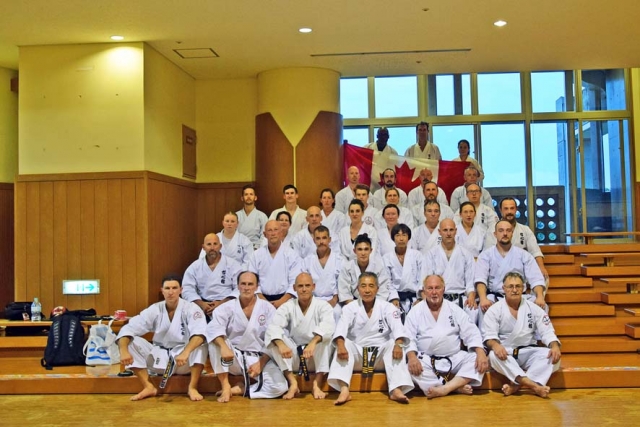 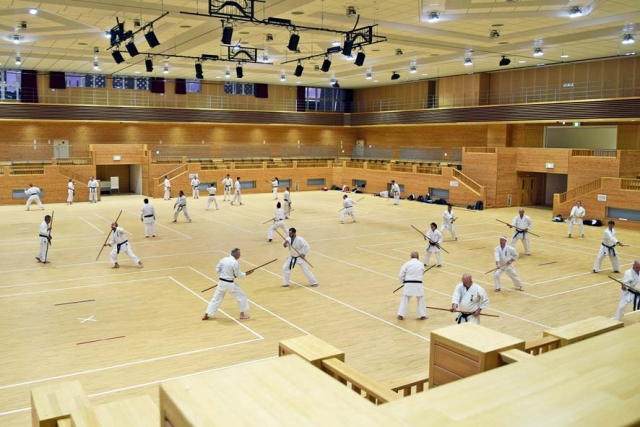 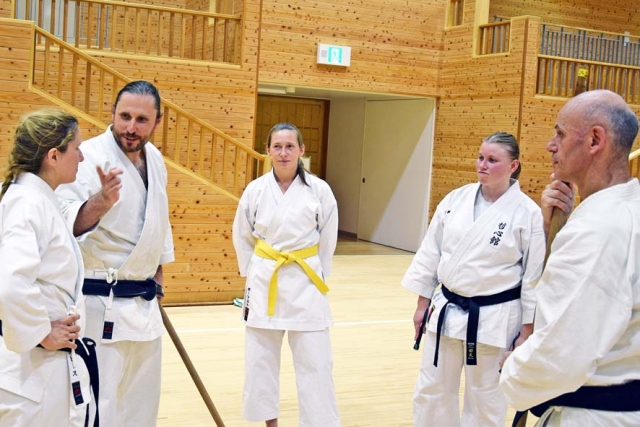 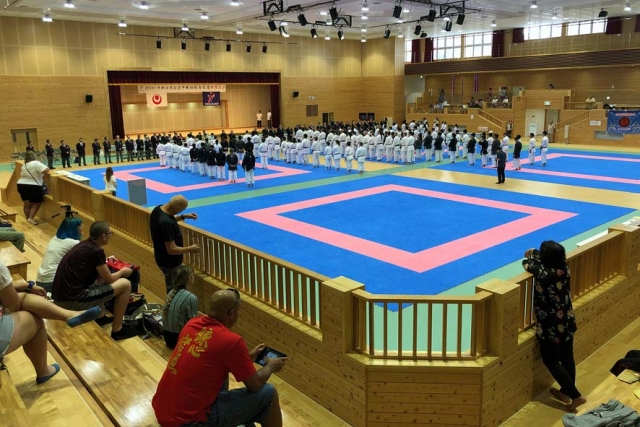 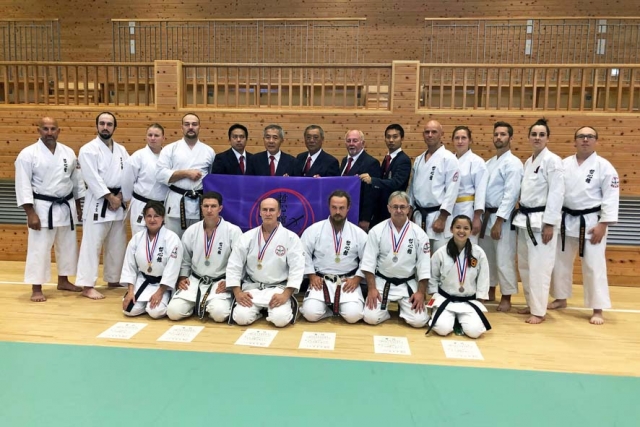 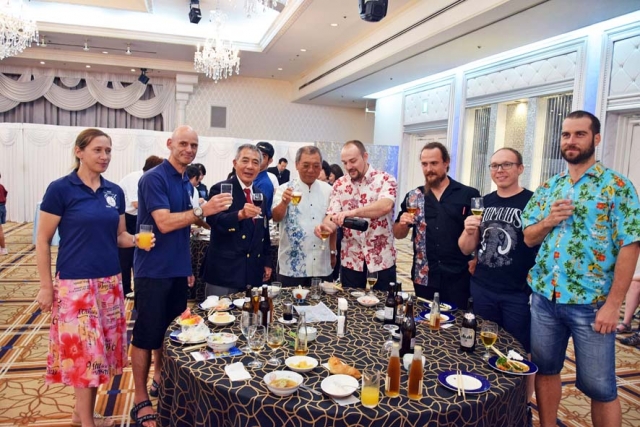 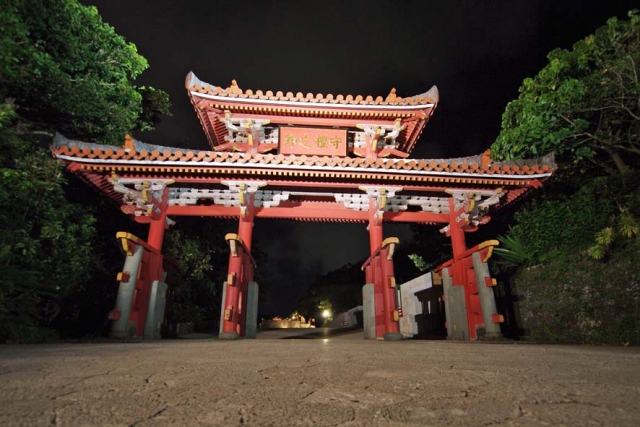 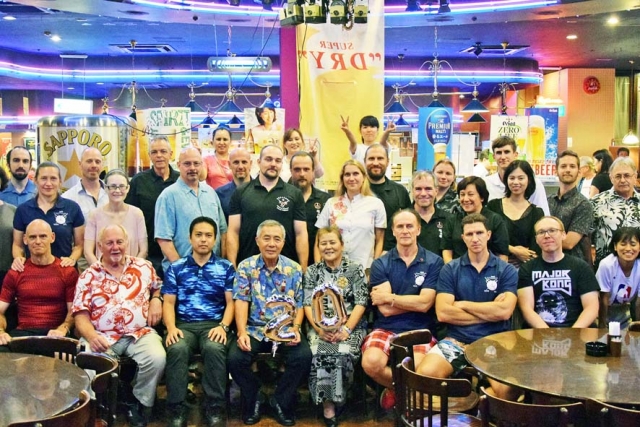