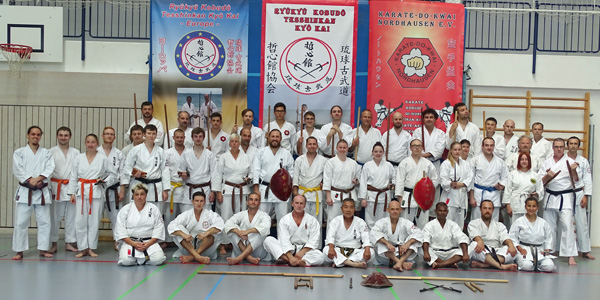 Kaichô Tamayose arrived on July 28. One hour after his arrival Sensei was ready to greet and welcome the more than 50 participants and begin practice. A lot of people from a wide georgraphic realm had come – guests from Sri Lanka, Russia (some even from Siberia), Belarus, Iran and Pakistan. Amongst the participants some guests from the Shimbukan could be welcomed. What is better to start with than Bô-no-Kihon. The foundation of the entire Bôjutsu. One might happen to forget Kata, but not Kihon. Admittedly, it might be less exciting than Kata, but it was their base. Only those who who trained Kihon sufficiently, would improve their Kata, according to Tamayose Sensei. So we got started. Fortunately, the temperature was well-meaning to us this year, which, however did not not stop us from sweating. Following Kihon, the focus shifted to Kata. Tamayose Sensei took care of the student grades teaching the details of Shûshi-no-Kun (Shô). Meanwhile Frank Pelny Sensei (5th Dan Kobudô, 6th Dan Karate, technical director of the Ryûkyû Kobudô Tesshinkan Kyô Kai Europe) taught the advanced and soon-to-come Dan-examinees.

That day’s last lesson was held by Frank Pelny: an interesting Kumite-series comprising all major methods of attack and defense found in the Bô-Kata. However, we were not finished yet. As every year we met in Pelny Sensei’s Dôjô in the evenings to have dinner and chat together. It is a wonderful feeling to cultivate old friendships and make new friends. Tesshinkan is a family, as Tamayose Sensei says.

On friday morning Tamayose Sensei started with a Karate lesson. With the assistance from Hagen Walter (3rd Dan, Jena) Sensei taught Kihon and carefully watched and corrected every one individually. The second part of that lesson was split. Sensei took care of prospect examinees, whereas the other group spent time on both Fukyugata. The following fifteen-minute break was barely enough to re-hydrate. The black-belts continued with a lesson on Sai with Tamayose Sensei who intensively explained some important biomechanical principles which he demonstrated tellingly with and without weapons: the meek, old gentleman from Okinawa moved a man of 220 pounds with ease. Thereafter the student grades could enjoy Sensei teaching Nunchaku (with substitutes of course) and Tekkô. The Dan-group revised the Bô-tai-Sai-Kumite, practiced Tunfa and Tinbe. Their training was concluded with a lesson in Nichô-Gama by Frank Pelny Sensei. The Kyû-grades practiced and studied the mechanics of Nunchaku strikes. Finally Tamayose Sensei informed the heads of the several Dôjôs about news from Okinawa, the new Budôkan and the next Kobudô World Tournament. Finally, while having barbecue and doughnuts at Frank Sensei’s Dôjô, the day came to an end.

On Saturday morning the Karate lesson centred around Kata and some applications. Some might have been surprised by the strength of Sensei’s grip. During the course of the day Eku became another lesson. Sebastian Edelmann Sensei (4th Dank Kobudô, 5th Dan Karate, Halle) taught Sai to the colour-belts – especially the usage and execution of blocking techniques. Immediately afterwards the first highlight: He used to be faster and more agile, Tamayose Sensei apologized and grabbed an Eku. Silence and attention: As fast as a tiger and as fiercely as a lion Sensei cut the air, no, not the air. One could sense that after his strikes there had to be something that now lay on the ground – cut into pieces.
It was our turn then to show Sensei what we could do and what we knew. During the Dan-preparation, Sensei individually took care of every student, which considering the remarkable number of examinees was quite a task. Afterwards the gym was prepared for the annual European-Cup of the Tesshinkan. The competitors demonstrated Kata with Bô, Sai, Tekkô and Eku. Furthermore Bô- and Sai-Kumite were performed. The team from Leipzig (Pierre Lorenz and Marcus Lauenstein) once again managed to excite the judges with their creativity and fierceness.

The scheduled trainings were given by the Senpai on Sunday morning: Hagen Walter analysed Pinan-Shodan, Pierre Lorenz (3rd Dan, Leipzig) continued the study of Sai, Viktor Vollmer and Doreen Schilling (3rd Dan, Nordhausen) gave another lesson Bô-tai-Sai. But where was Sensei? He had an awful lot to do. 16 examinees and 17 examinations. That took time, a lot of time. Finally, we are happy to announce that everyone managed to reach their set goals.

However, we were not done yet. Sensei, barefooted, wearing a suit, asked us to line up. He then proceeded to hand out the certificates of participation. Having given out the last one, everyone was lined up again. “Shiko-Dachi! Chûdan-Tsuki! Ichi! Ni!”, Sensei screamed. That is an awesome tradition Sensei has come up with, which manages to raise the spirit once more before everyone parts and says farewell. For that, too, Sensei had a traditional way to do it. Moving like a bicyle chain everyone shook everyone else’s hand. Tesshinkan is a family!

We thank Tamayose Hidemi Sensei for the awesome training and great days with him an Masako-san. We thank Masako-san as well for acting as a loving daycare. We thank Frank Pelny and his team. Great organisation and preparation – as always. Thanks to the guests for having participated and spreading such a friendly atmosphere. Thanks to our interpreters Namikawa Asami-san and Ekatarina Kiselewa. 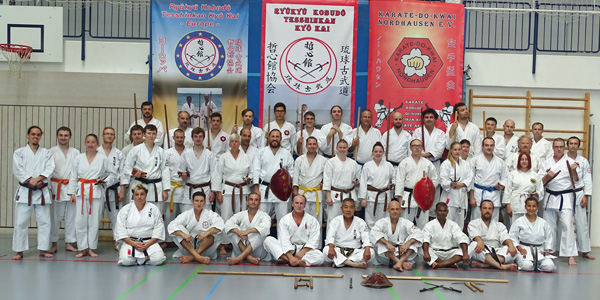 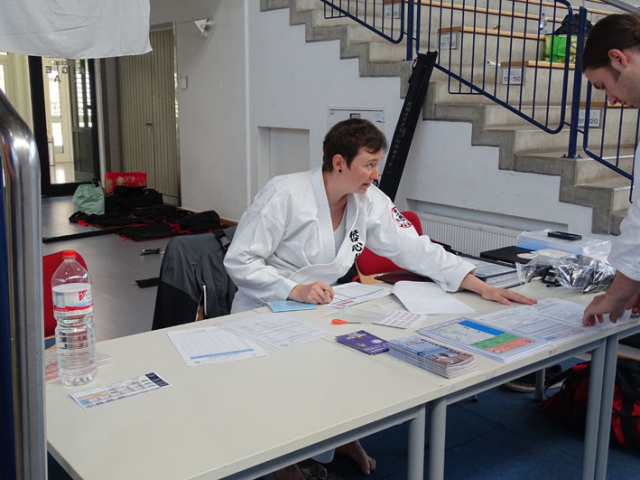 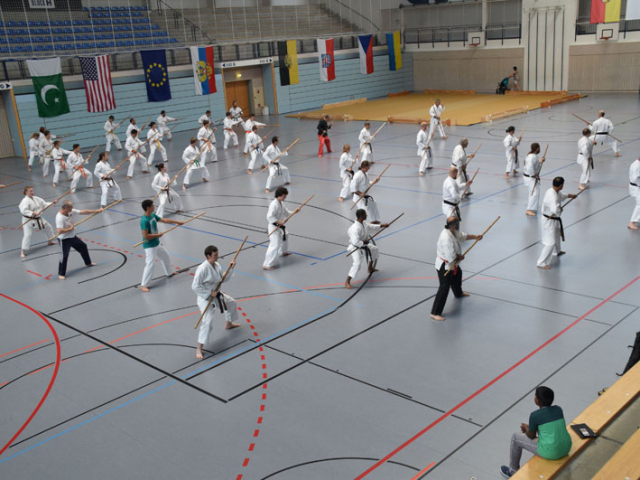 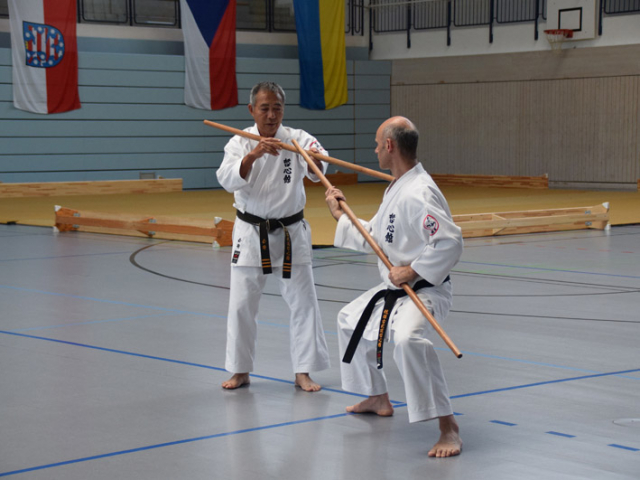 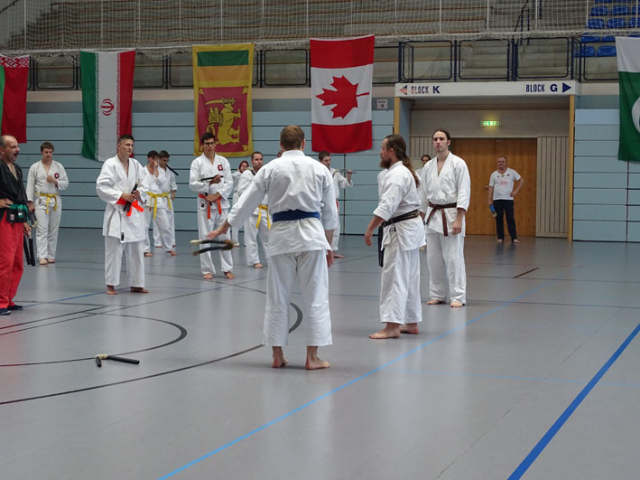 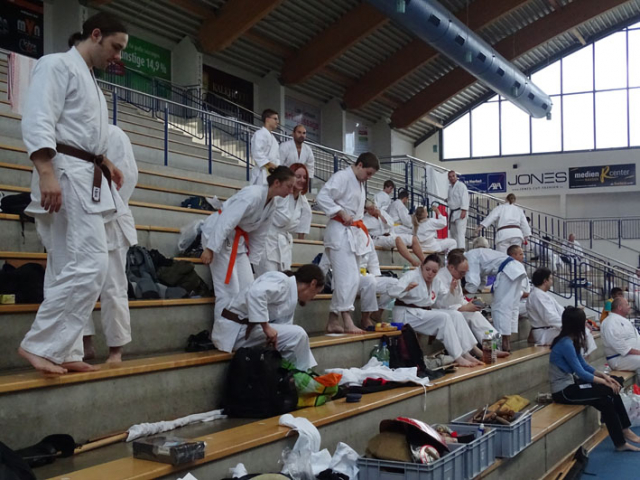 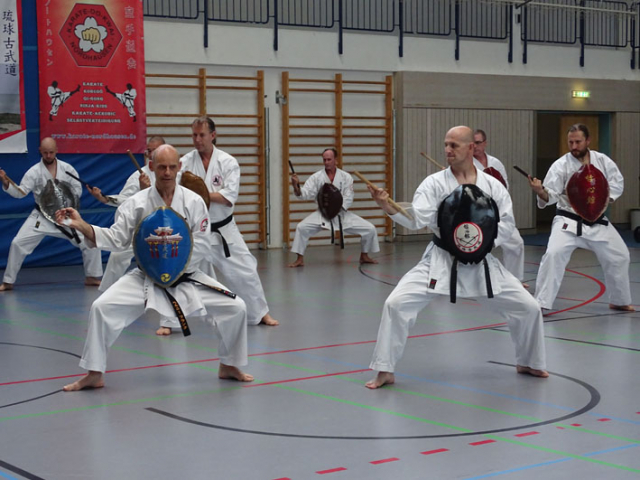 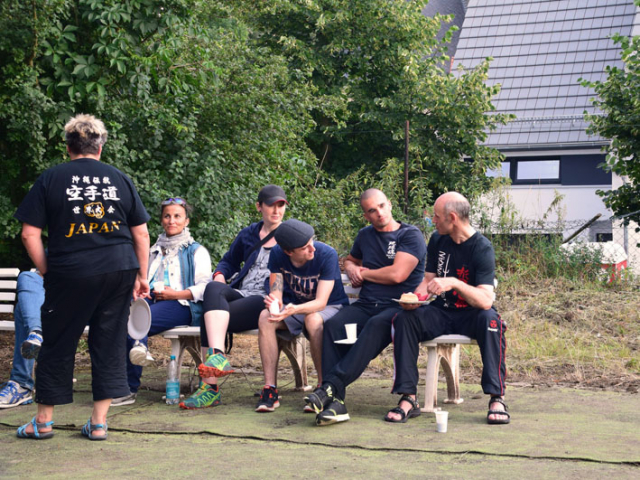 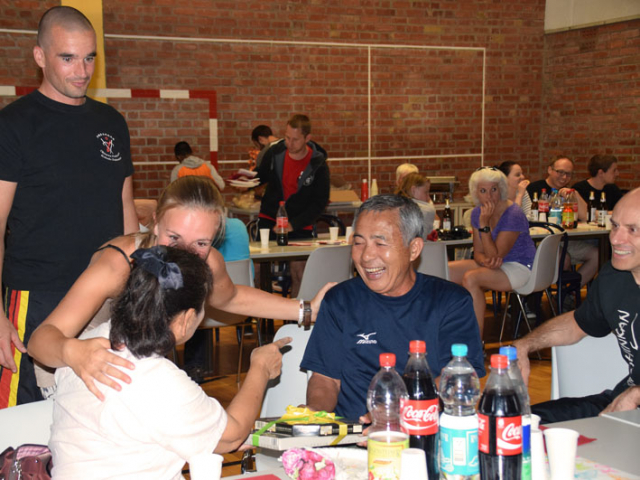 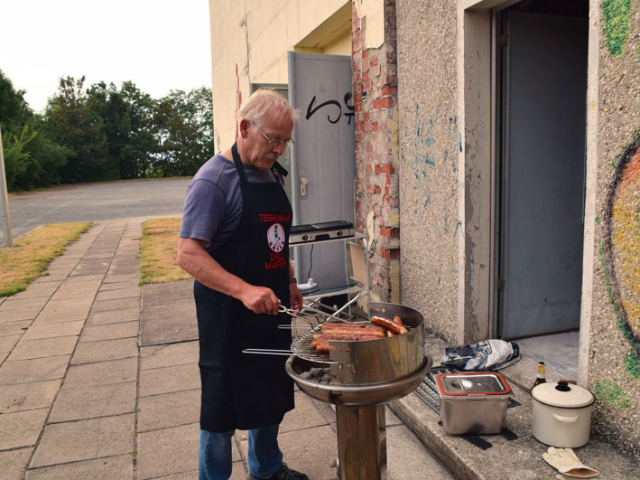 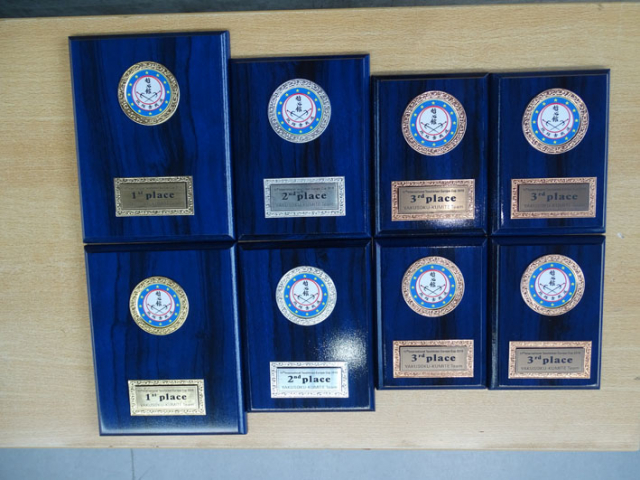 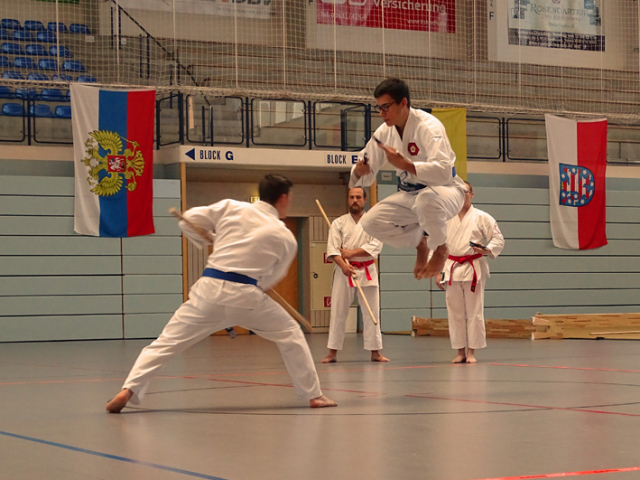 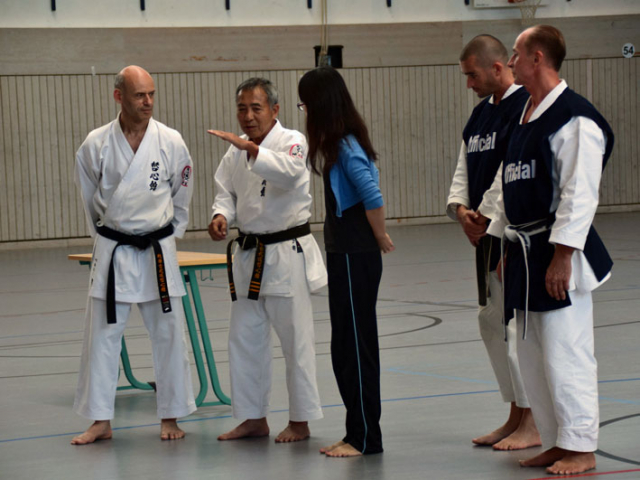 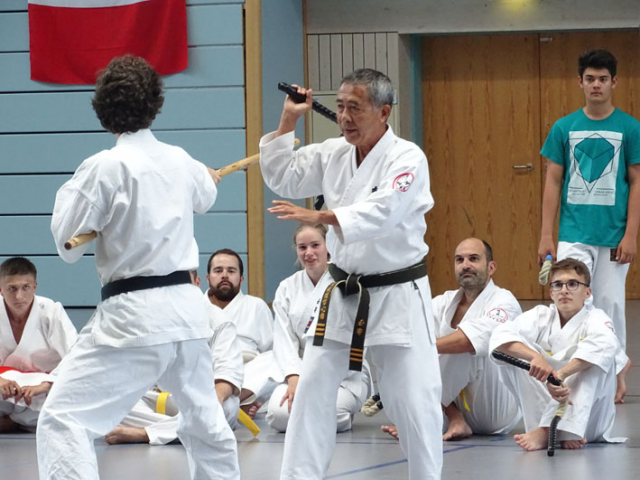 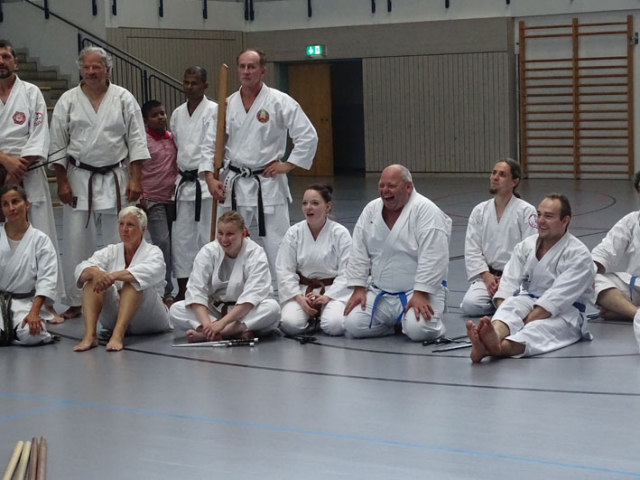 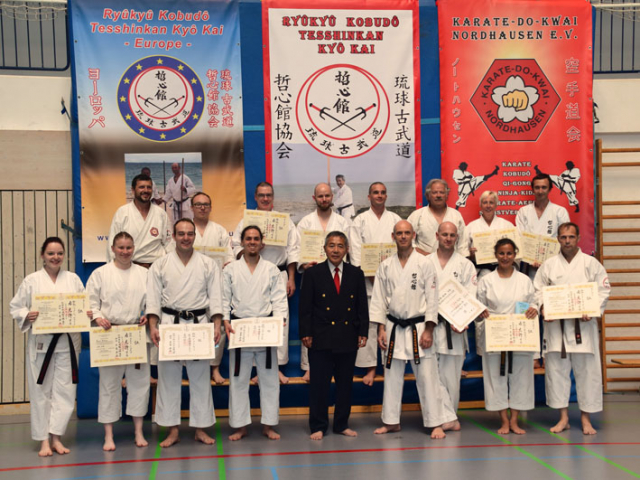