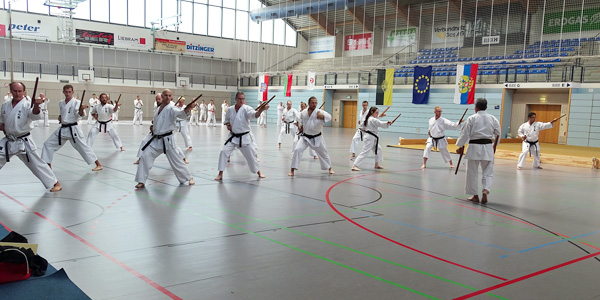 Our president, Kaichô Tamayose Hidemi, along with his wife Masako-san, his son Tetsushi-San and two grandchildren paid a visit to Nordhausen (GER). Already thirty minutes after his arrival, Sensei stood readily in the Dôjô eager to teach the nearly 60 participants from five nations (Germany, Belarus, Russia, Sri Lanka and Japan).

Of course, the seminar opener was a Bô-no Kihon session followed by Bô-Kata and Bô-Kihon-Kumite. The welcome-party in the Dôjô of Pelny Sensei concluded the first day – bringing the Tesshinkan family closer together.

The Friday started with a lesson in Shôrin-Ryû Karate. Thereupon five lessons teaching up to five different weapons followed. When the training was over, the black belts gathered around Tamayose Kaichô for news from Okinawa. Tamayose Kaichô informed us about the up-coming world championship in Okinawa next year in August. We concluded the Friday with another get-togther, aptly named summit party, in Pelny Sensei’s Dôjô – to relax, refresh and intensive and form friendships.

On Saturday morning, the day was started with another lesson in Shôrin-Ryû Karate and, subsequently, three weapon-based lessons filled the time towards the annual, by now the 12th International Tesshinkan Europe Cup. Aside from Kata and Yakusoku Kumite, this year – for the first time – Bô-Shiai, i.e. free sparring, was included. Not only was the protective clothing impressive, but the fights were so, too.

The highlights on Sunday were the examinations. Alongside the tests, regular training in Kobudô and Karate was held, too, leaving no one idle. All in all, 9 examinees applied for new ranks ranging from 1st Dan to 4th Dan with Tamayose Kaichô, Tetsushi Sensei and Pelny Sensei. We are happy to announce, that everyone passed. Furthermore, Edelmann Sensei examined 7 Kobudôka for Kyû-ranks, who succesfully passed. Congratulation to all examinees!

Finally, after having handed out the certificates of both the passed exams and participation, Tamayose Kaichô ordered us to assume a low Shiko-Dachi and concluded the seminar with 10 Chûdan-Tsuki. Subsequently, Tamayose Kaichô shook everyone’s hand and thanked them for their participation. We are a family.

We would like to express our most sincere gratitude towards Tamayose Kaichô and Tetsushi Sensei for having taught us so much. We would, furthermore, like to thank the trainers Pelny Sensei, Edelmann Sensei, Walter Sensei, Schilling Sensei and Vollmer Sensei. Last, but not least, the team around Frank Pelny Sensei deserves applause for their effort organising the event and taking care of everyone. Thank you. 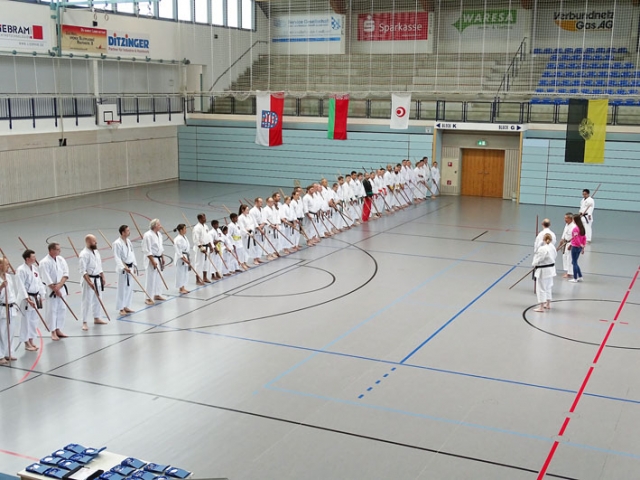 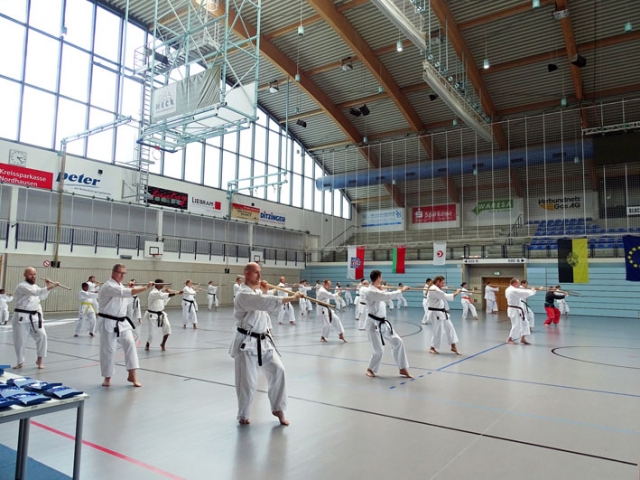 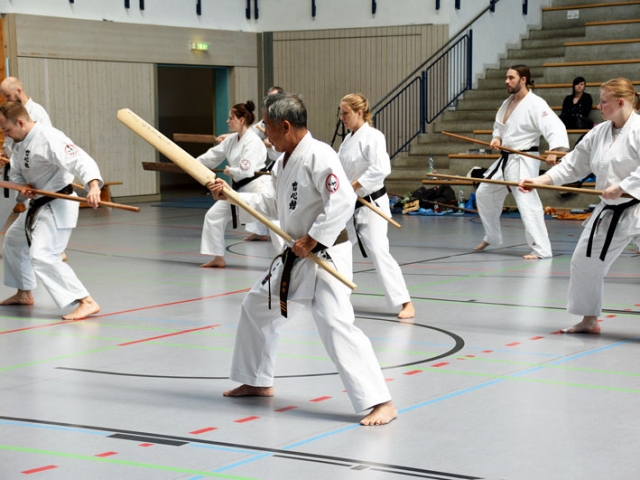 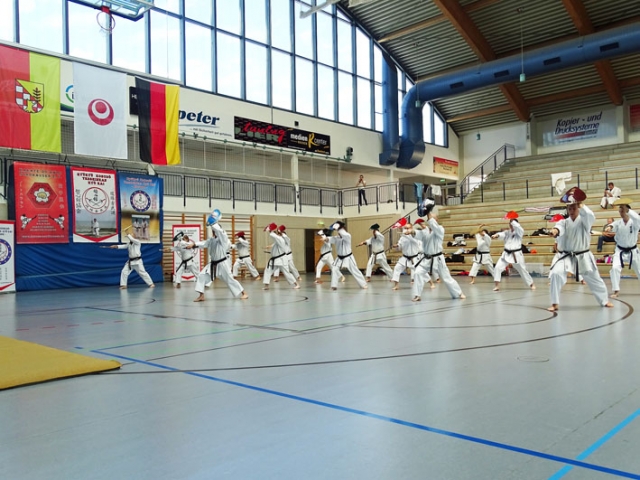 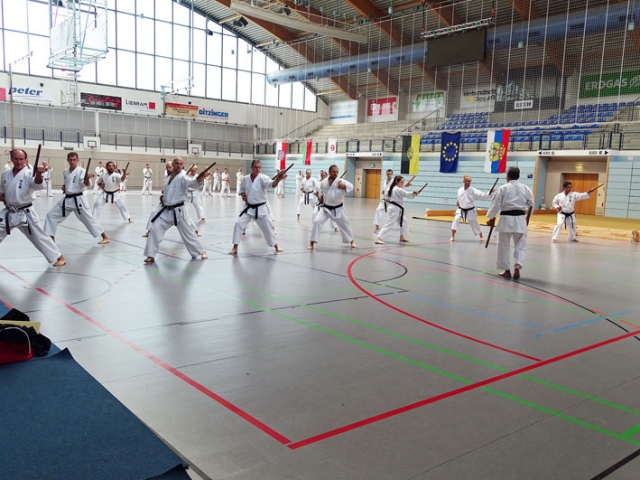 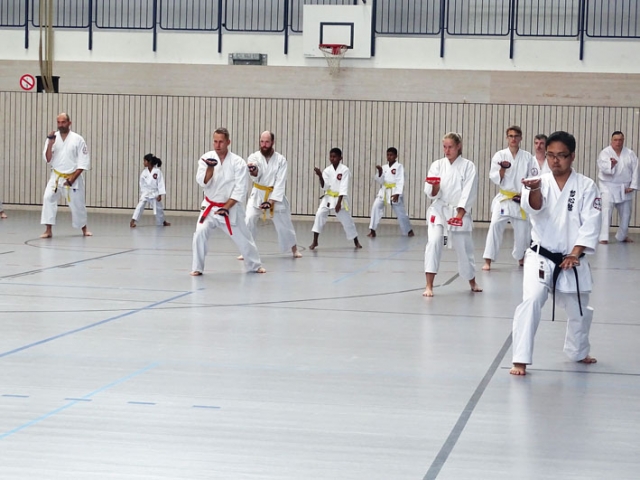 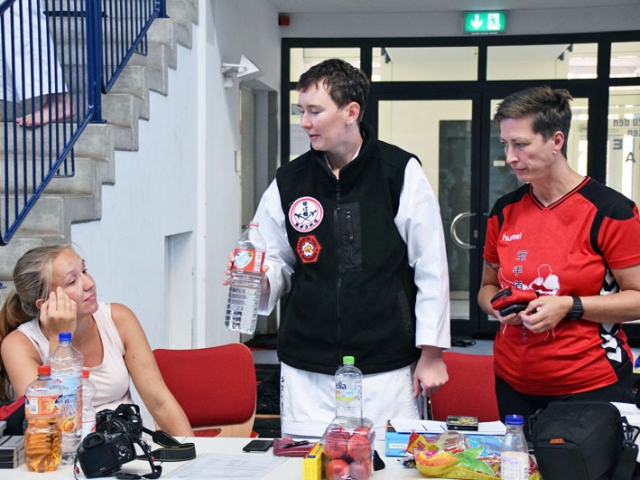 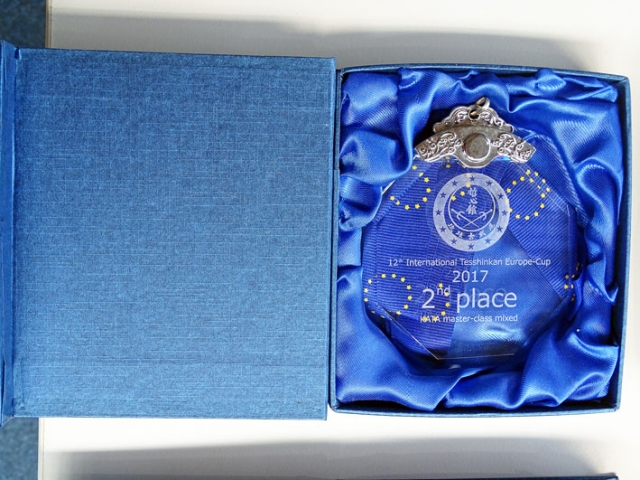 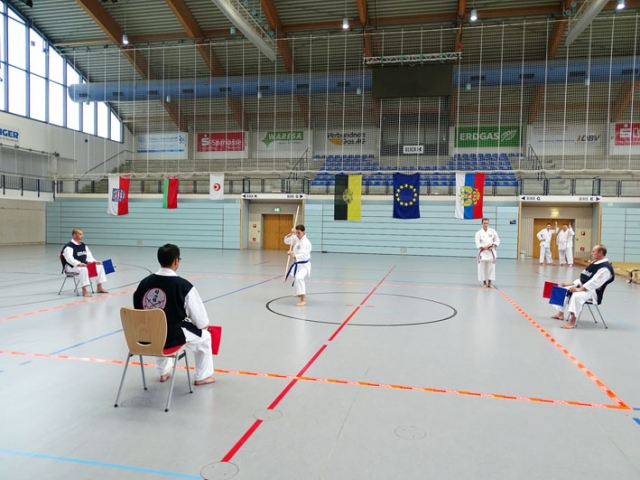 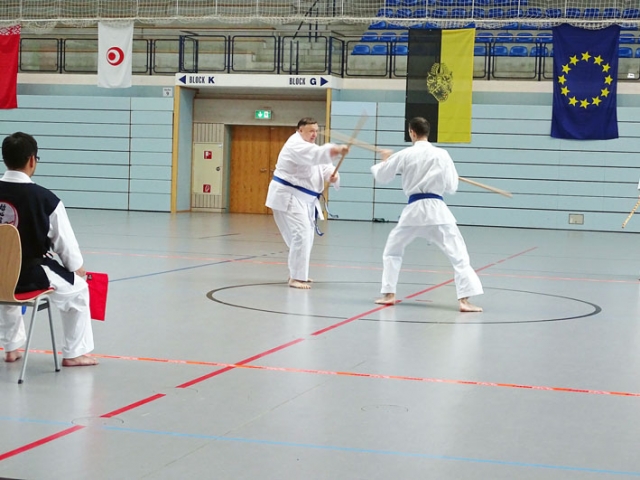 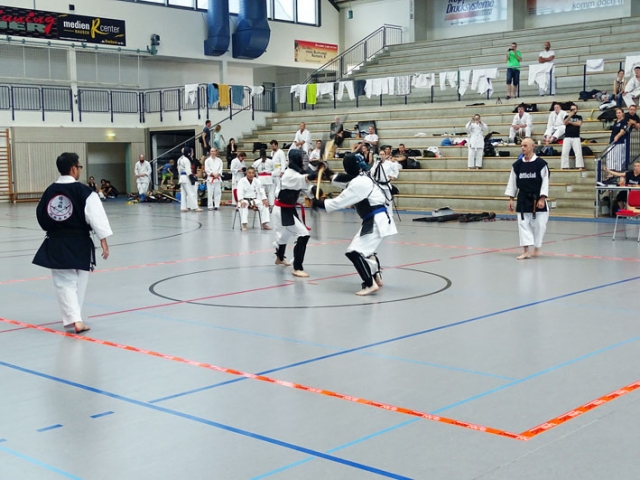 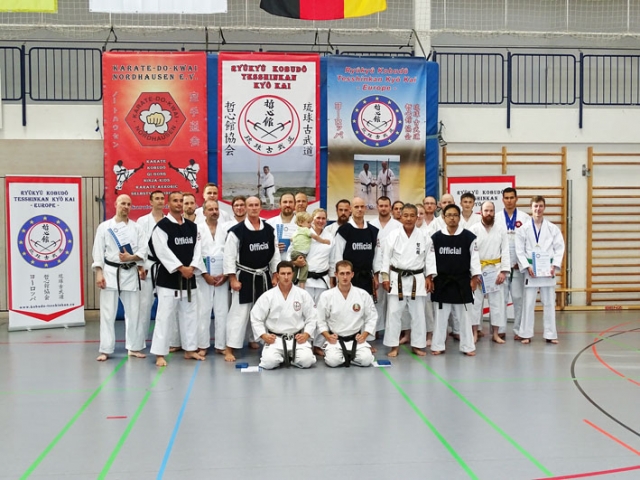 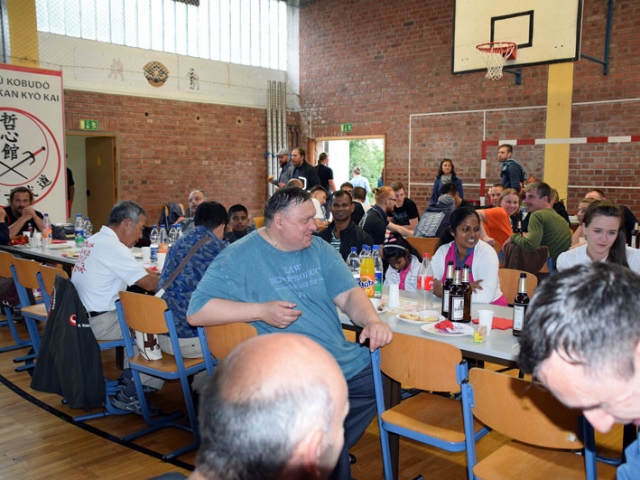 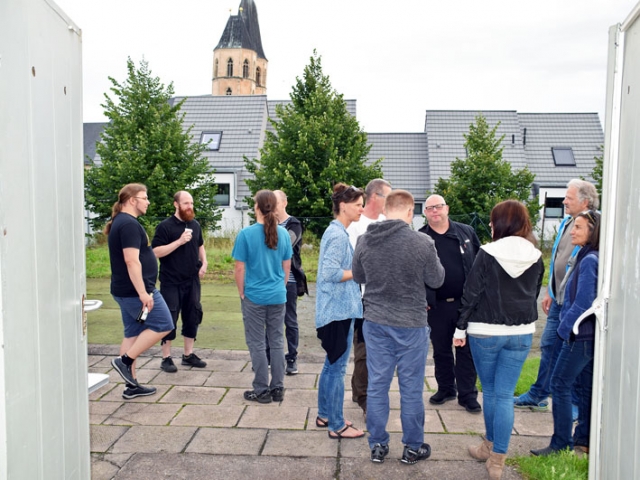 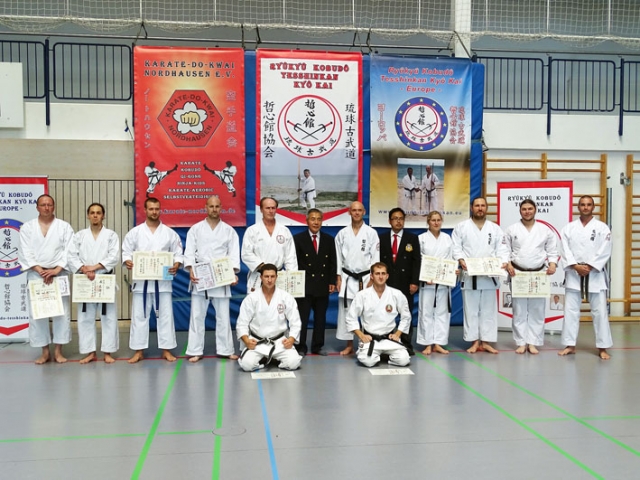 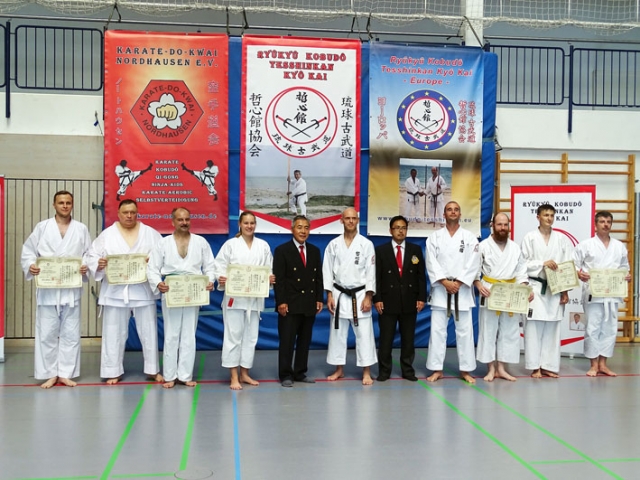 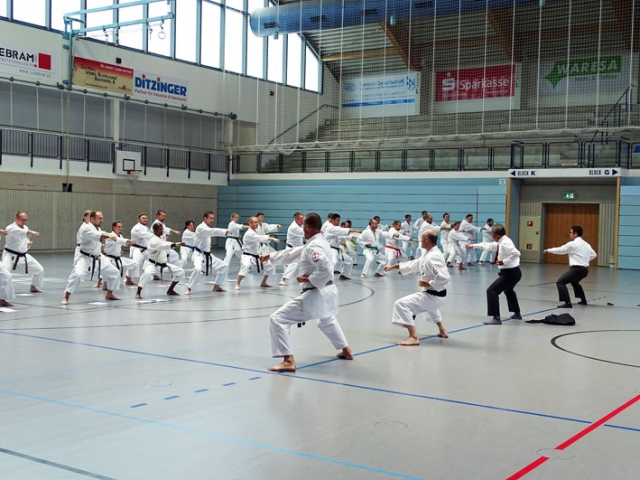